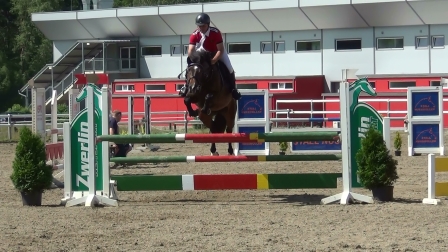 Father Casall is the climber among the young stallions. Successful in big sport with Rolf Goran Bengtson. The mother U2 passed a good mare performance test in Lürschau. When she entered the studbook she received a premium. Austria is currently doing the basic training u. completed the mare performance test in Holstein in early February 2011. Station test in Lürschau: overall grade 8.43. In free jumping training as well as in front of the judge she got 9.0 each. When she was entered in the stud book, she received 51 points. (State premium candidate) The mare gave birth to a colt by DIARADO (Diamant de Semily / Corrado I) on March 26th, 2012. (DIALLO) 2013: First tournaments: CSIYH1 * 5-6 year old horses victorious a.placed.

Video of one of the TOP RITTE !!
https://www.youtube.com/watch?v=Z5lx6SCMlOE